We drove down from Dubrovnik (read about it here) to Split in about three hours. The roads are fantastic, which I hadn’t imagined AT ALL. The landscape is gorgeous – you are driving parallel to the  Adriatic coast almost throughout. You even cross Bosnia & Herzegovina through Neum, a town so small, you won’t realise you passed it.

Ofcourse you do realise, thanks to a full blown border control. Yeah! there is one – and it’s serious stuff. Not like the crossing between France & Switzerland at Mulhouse – which was unmanned and completely deserted!

Drive from Dubrovnik to Split 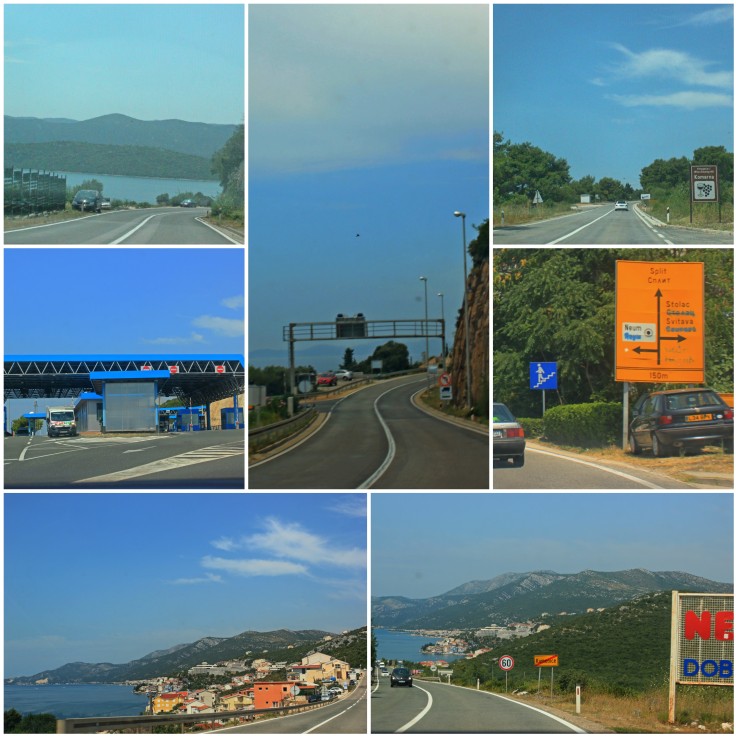 Finding a parking spot in Split is INSANE. Thankfully the staff at our hotel had warned us about it way before hand.As per instructions, we called them 20 minutes before we got there. The guy actually met us and showed us where to park (completely free parking).

There are apps that help you find free parking in Croatia, but trust me, we wouldn’t have found a spot if it weren’t for Stipe – our very friendly hotel host. Just FYI, paid parking is  easily available at the Riva promenade. You can read about parking hacks in Split here. 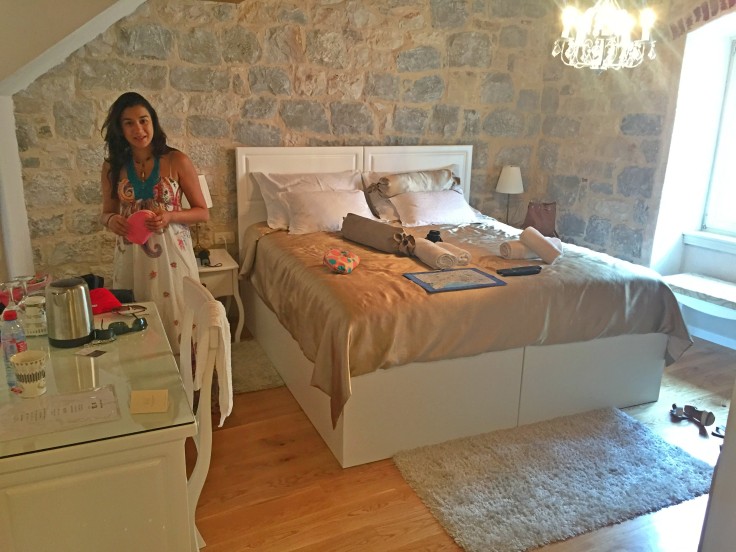 We stayed at Hotel Villa Split, a gorgeous old fashioned hotel that was just recently renovated. It is bang in the middle of old town, which is a pedestrian zone only. So the walk between parking and our hotel was a good 20 plus minutes.We were at a stones throw from all the touristy spots. And about a 3 minute walk from the famous Riva promenade.

Our room was pretty with stone walls and a brick lined window, giving it a luxurious yet cosy feel. But what stood out most was the staff. Homely and they went out of their way to make us comfortable. We had our three island tour early next day and landed up for breakfast a little earlier than the opening hours of the small restaurant. But the lady at the counter made us some nice coffee and got everything in place so we could get breakfast before we left.

The receptionist, Tina, was well informed and very precise about where to eat, or shop and what to do. She drew it all on a map and even suggested an itinerary that we could follow.

The only ‘con’ about the place is that there isn’t an elevator and you have to climb stairs  to your room – and we were on the third floor – so that got crazy! Thankfully the parents were on the second!  Stipe helped us get our bags up so even that was handled. Other than that, I thoroughly recommend this place. Fantastic rooms and a super team. I was so happy I even got all their names down. Big thank you to Cvita, Tina, Ivona, Stipe and Filip for making our stay so memorable.

Places of interest in Split

We spent about 24 hours in Split. And on our second day here, we took a day trip around the three islands of  Hvar, Bol and Pakleni.

In Split, especially the Diocletian’s Palace ‘complex’, you lose track of time.  The walls, ruins, Egyptian artefacts and sometimes people dressed up like in the Middle ages seem all too real… 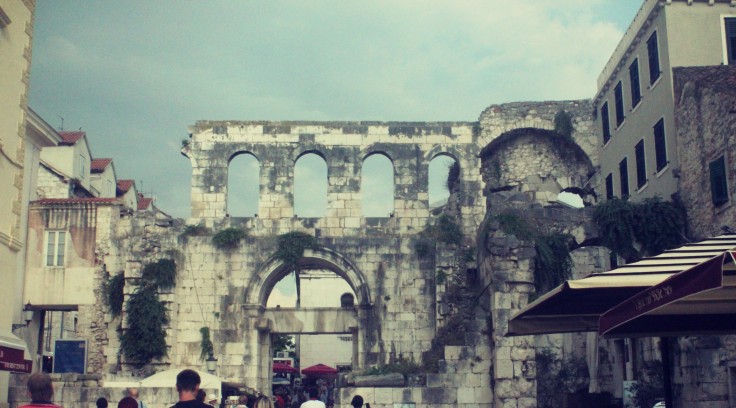 … And then suddenly you are caught smack in the middle of a flash mob of adolescents moving to the tune of a song you haven’t even heard. Took the middle ages to a whole new level.

This is the romantically ruined heart of Split, complete with a labyrinth of alleyways and sometimes small paths leading to nowhere. It isn’t just a palace, but a complex gated on 4 sides, with the Golden gate in the Northish, Silver gate, Bronze gate and Iron gate. Inside the complex you have 7 main touristy sights such as :

2. The Cathedral of St. Domnius – the Patron saint of Split

The museum aims to shed some light on the lives and habits of Dalmations especially those living around Split. I liked the costume section, with beautiful dresses in crochet, embroidery and lace work. The jewellery and wood work displays were fantastic too.

But IMO,  the museum was put together in an almost superficial, non-personal way. Like a last minute job. And honestly, in a way that only a Croatian or some one with deep knowledge of their history would find interesting. It wasn’t inviting enough for an outsider to get mesmerized. Some exhibits seemed so out of place while some others were obviously artificial, and I just didn’t see the point of putting them around.  And hence not something I would recommend, unless you have spare time on hand and are looking for a cool indoor place to spend some time.

A small and hard to find place, but if you have the imagination, it is quite breath-taking. At the entrance is a headless sphinx in black marble – one of the 12 sphinxes – that emperor Diocletian brought from Egypt. The ornate ceiling, is worth the effort needed to find the place. The bronze statue is that of St. John the Baptist sculpted by Ivan Mestrovic. In front of the statue is a baptism bath, which today is filled with Kunas, and other coins. From a temple dedicated to Jupiter, the Roman King of Gods, made by a man who hated Christians (Diocletian) to now a  baptistery, a place where you can become a Christian, this place has been through tremendous change and therefore is of immense historical importance.

6. Crypt of St. Lucia under the Cathedral

The best part of the crypt was reading notes and letters written to the saint by children from around the world.

On your way out from the Golden gate,  don’t forget to rub the shiny big toe of Gregorius of Nin – a gigantic bronze man made by Ivan Mestrovic, and which presumably brings some luck.

This long stretch of walkway is just by the sea on one side and a line of cafés on the other. Most people spend hours just gazing at the sea of watching people go by. And if cafés are not your thing, grab a sandwich and sit on the many benches overlooking the busy waters filled with catamarans and cruise liners. 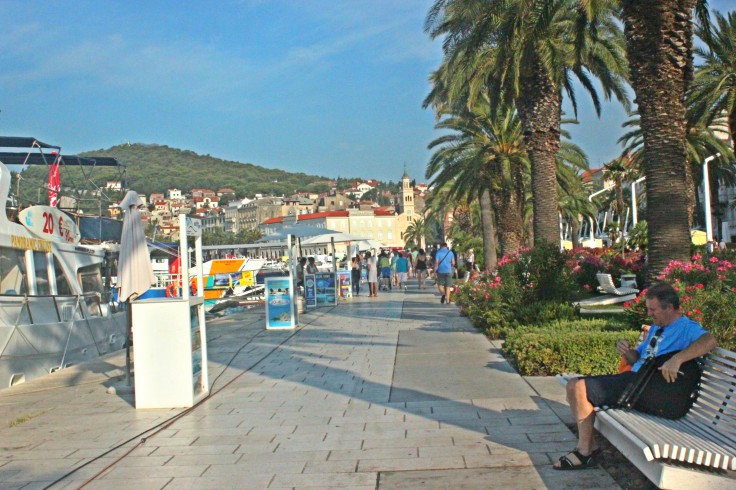 Random stuff that caught my eye: 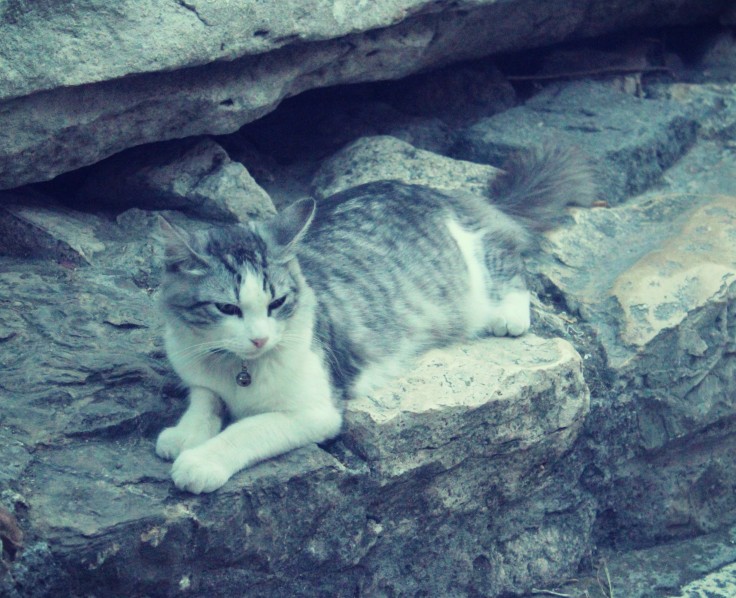 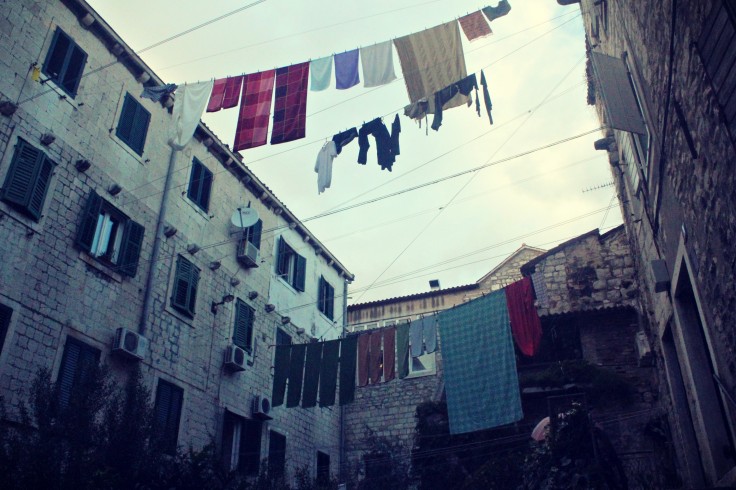 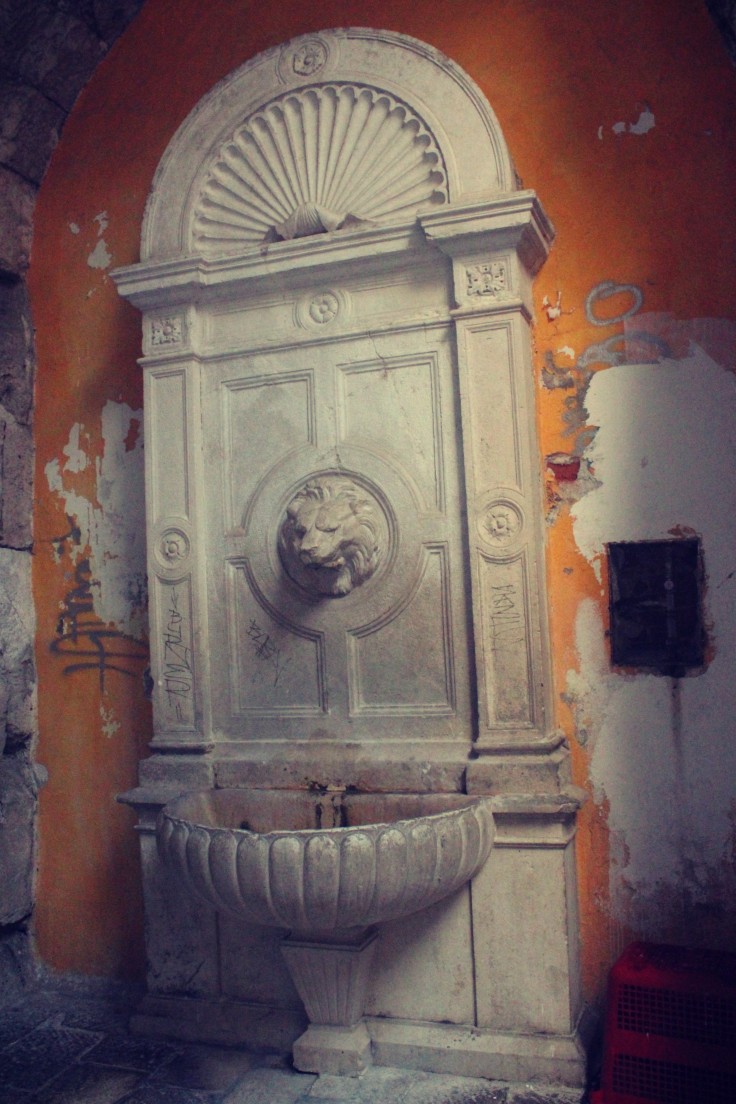 The food was really ok – not something you should go for at this restaurant. Service was very slow. Also, it was expensive compared to the other places around town. But the reason to go here, if you really must,  is the location. You actually are right in the middle of the ruins. In the evenings, the place takes on a mystical shape thanks to all the lighting and music, which only accentuate the architecture. I’d suggest you just pick up a drink at Lvxor and plonk on the burgundy cushions laid out by the restaurant on the romantic steps, under the moonlit sky and the warm remains of the Diocletian’s palace.  Address: Kraj Sv.Ivana 11, Split 21000, Croatia. T: +385 (0) 21 341 082

Though we stayed another night at Split, we took a 3 island tour to Hvar, Pakleni, islands and Zlatni Rat Beach on Bol.  That pretty much accounted for our entire second day here. You can read about that ici.

If you need more details do get in touch. I have tried to keep it short and simple here but if you have the need I could go on and on on mail.

2 thoughts on “24 hours in Split – Chronicles of Croatia”